Workshop in the Countryside – JOAN FONTCUBERTA
POST-PHOTOGRAPHY: BETWEEN DOCUMENT AND FICTION
December 11, 12 and 13, 2020 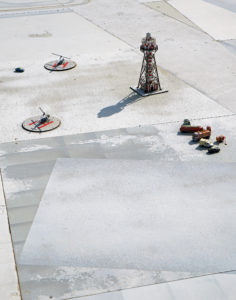 Considered worldwide as one of the great masters of contemporary photography, for more than four decades Joan Fontcuberta has focused his artistic activity in the field of photography on the conflicts between nature, technology, photography and truth.

An artist, teacher, essayist, critic and promoter of Spanish art specializing in photography.
His extensive photographic work is characterized by the use of digital tools at the processing stage and presentations which encourage the active participation of the viewer.
Joan Fontcuberta is the great renovator of Spanish photography.
His work takes a critical line with regard to photography as evidence of the real.
Many of his works involve raising doubts about the element of truth that is normally attributed to photographic images.
His position is one of questioning and doubting the veracity of the photographic image.

Description of the workshop:
Hypermodernity exalts an excess of images and their consumption. We humans today belong to another species: homo fotograficus. For the first time in history we are producers and consumers of images. The internet, mobile phones, video surveillance cameras and all kinds of graphic recording devices cause a visual oversaturation that can end up blinding us. At a time when the image constitutes more than ever the social space of the human, it becomes a priority to clarify its nature and manage its abundance.
Tucked away in the surroundings of the Ribera Sacra, we propose to debate questions of narrativity and truthfulness from aesthetic, epistemological and political perspectives. Does it still make sense to conceptualise document and fiction as antagonistic categories? What legitimacy do we grant to post-memory or appropriationism as methodologies for critical storytelling? How to deploy post- photography documentary practices? Ultimately we will be exploring the conflics and challenges of contemporary photographic creation.
In addition to addressing these issues and relating them to photography, anyone who wishes to show their work or photographic project is free to do so… at some point during the weekend.

Photographers, artists and professionals of the image, teachers, students and lovers of photography, Fine Arts, Audiovisual Communication, and by extension students and anyone who dabbles in disciplines related to photography, art, history, science, humanism, journalism and communication.

Materials:
A notebook and any personal work you would like Joan Fontcuberta to look at

JOAN FONTCUBERTA
Barcelona, 1955.
Artist, disseminator, essayist, curator, theorist, teacher, critic and art promoter specializing in photography.
David Octavius Hill Award from the Fotografisches Akademie GDL of Germany in 1988, Chevalier de l’Ordre des Arts et des Lettres from the Ministry of Culture in France in 1994, National Photography Prize awarded by the Ministry of Education, Culture and Sports of Spain in 1998 and National Essay Prize in 2011.
As promoter of events related to the art of photography, he organized the Catalan Photography Days in 1979, and in 1982 he collaborated in setting up the Barcelona Photographic Spring. In 1984, he was the curator of the exhibition Idas y Caos. The Photographic Avant-Garde in Spain 1920-1945, exhibited at the National Library of Madrid and at the International Photography Center (ICP) of New York and later Photographic Creation in Spain 1968-88, exhibited at the Cantini Museum in Marseille and at the Santa Monica Art Centre of Barcelona. In 1996 he was appointed Artistic Director of the Arles International Festival of Photography. In 1998 he won the National Photography Prize awarded by the Ministry of Culture of Spain. In 2011 he won the National Essay Prize awarded by the Ministry of Culture for his work La Cámara de Pandora.
His extensive photographic work is characterized by the use of digital tools at the processing stage and presentations which encourage the active participation of the viewer. In common with other contemporary artists, his work takes a critical view of reality and of photographic, historical or fictional truths using the medium of photography and its context. Between 1985 and 2001, Fontcuberta’s work was exhibited in more than thirty museums and exhibition centres in Europe, North America and Japan, including in Lausanne, Barcelona and Montreal.
His work has been acquired by public collections, particularly in the United States, Germany, France, Spain and Argentina, including the Pompidou Center in Paris, the Metropolitan Museum of Art and Modern Art in New York, the Art Institute of Chicago, the Museum für Kunst und Gewerbe in Hamburg, the IVAM in Valencia and the Museum of Fine Arts in Buenos Aires. On March 7, 2013 he won the prestigious Hasselblad International Photography Prize.

Prices:
350€ (Workshop + full board and lodging in the Casa dos Muros + light snacks during the workshop)

We begin with dinner on Friday evening and finish with lunch on Sunday (both included).
Places are limited and will be filled strictly in order of registration.
Registration is open until the first day of the workshop if places are still available.
The workshop will be given in Spanish.
We have a room specifically adapted to the requirements of the health authorities, among them, the reduction of capacity for conducting the workshops.