Workshop in the Countryside – ANTOINE D’AGATA
PUSHING THE BOUNDARIES OF THE PHOTOGRAPHIC ACT
October 23, 24 and 25, 2020

Antoine d’Agata’s reputation as a teacher is extraordinary. Some participants have
been quoted as saying “A workshop with d’Agata is an experience that changes your
life”. He has a unique ability to guide individuals in exploring their inner selves, both emotionally and creatively. His photography is purely subjective, echoing Robert Capa’s famous mantra “If your pictures aren’t good enough, you aren’t close enough”.
“It isn’t about how a photographer looks at the world. What’s important is his or her intimate relationship with it.” (Antoine d’Agata)

Description of the workshop:
This workshop with Antoine d’Agata is an immersive exploration of photographic practice in an intensive and intimate context.
We will consider what role photography has in society, how we relate to photography as individuals and how we see ourselves.
Participants will be encouraged to reflect on the relationship between human existence and photography and how that relationship manifests in ourselves, both on the human level as well as through images.
Through this workshop, the topics it explores, and with the thoughts and guidance of d’Agata, participants are encouraged to immerse themselves deeply in new concepts in photography.
Antoine will review and analyse the work of any of the participants who would like to bring images to the workshop.
Participants will be given a photographic project which will be analysed later during the workshop.
In addition to the above, d’Agata will show two videos that present his own work:
– One audiovisual piece that reviews thirty years of his work
– A fragment of the film White Noise, his most recent cinematographic production, which was presented last January at the Rotterdam Film Festival.
REGISTER NOW
Materials needed:
A notebook, a digital stills camera and a computer (to download and edit photographs if necessary)
If anyone would like Antoine D’Agata to look at their work, they should bring their portfolio in some kind of photographic medium: computer, book, paper…
Aims of the workshop:
To help each participant to explore a more psychological approach to image making.To learn to edit, sequence and create unique and innovative images.

To get participants to challenge themselves and leave their comfort zone.

Audience:
Photographers, teachers and students of Photography, Fine Arts or Audiovisual Communication, and anyone interested in photography either as a professional or an amateur. 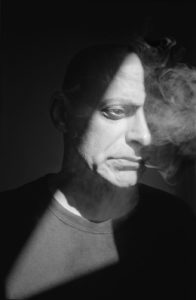 (Marseilles 1961) is a photographer and film maker.
He studied photography at the International Center of Photography in New York,
where his teachers included Nan Goldin and Larry Clark. He has won many awards and
his work has been widely exhibited. Some of his published photobooks are Insomnia,
Vortex, Stigma, Psychogéographie, Ice and Anticorps with which he won the
Rencontres d’Arles Author Book Award in 2013 and exhibited at Le Bal. He joined Magnum Photos in 2004.
He exhibits regularly in different museums around the world and his photographs are part of the collections of several international institutions. He is the author of numerous innovative photobooks and is a member of the Magnum Photos agency. He has also directed several films. He won the Niépce Prize in 2001.

Price:
350€ (Workshop + full board and lodging in the Casa dos Muros + light snacks during the workshop)

The schedule for Friday and Saturday is orientative. It will be fixed at the start of the workshop, when times for work to be done outside the classroom will also be discussed.
We begin with dinner on Friday evening and finish with lunch on Sunday (both included).
Places are limited and will be filled strictly in order of registration.

We have a room specifically adapted to the requirements of the health authorities, among them, the reduction of capacity for conducting the workshops.